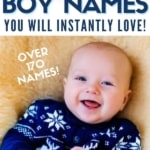 Check out these strong, handsome boy names with meanings and origins. This ultimate list of handsome baby boy names has 170+ unique names ranging from traditional to more uncommon names for boys you’ll love!

Strength, confidence, admiration—these are all things that come to mind when the word ‘handsome’ comes out. It’s more than just someone who is cute: handsome covers everything from someone who carries themselves with dignity and respects both himself and others, to the mysteriousness of a handsome stranger in old movies.

A name that is handsome—or even one that means handsome—immediately sets the stage in interactions. It can provide a classic, comfortable name that makes someone instantly relatable, or could elicit a feeling of power and leadership (making it a great choice if you are hoping for a future president).

Your little boy is sure to stand out with any name from this list as either a first name or a strong middle name. Keep scrolling for all 170+!

RELATED: Looking for other boy name ideas? Check out this list of 170 One Syllable Boy Names (For First or Middle Names) that we can’t get enough of!

What are the most attractive male names?

Attractive male names tend to evoke characteristics such as strong, old fashioned, or interesting, or they could be edgy, exotic, or cool guy names, too.

In fact, what makes a name handsome really depends on personal preference.

And often, the best names for boys tend to fall into multiple categories—for example, William made our list of most handsome, but also is one of our favorite flower names for boys as well!

You could also go with great sound yet rare boys’ names that make people ask to hear it again! With that in mind, we’ve included some great names that cover all those angles,

And while cute for a baby, these handsome boy names will attract attention and respect in later years!

Related: Choosing a pediatrician: questions to ask at a meet and greet

Why include the meanings?

I love to learn the meaning behind a name. It adds a fun element to the naming process and can help you break the tie between two great choices.

A name’s meaning and origin can also help tie your children to their ancestry or to your favorite places around the world. A name may also give a child confidence and purpose as they grow older. It can also be just a fun side note, but knowing the meaning of a name can help narrow down choices (and help you avoid those that may have unintended meanings or historical ties!

Maybe you are looking for a boy’s name that means handsome, rather than just an attractive sounding name. If so, here are some of our favorites:

There are many others that mean handsome or beautiful—you could easily find one with an origin that is meaningful to you!

Be sure to also check out these strong nature names for boys, they are some great alternatives (and a few made this list too!)

Did you love these handsome baby boy names?

I hope you enjoyed this list as much as I did and that you found some great baby name inspiration to share and save!

I’ve got even more great baby names you’ll love! If you enjoyed this list, check out these 63 Awesome One Syllable Unisex Names for 2021!

What did you think of this list? Are there any adorable boy names you’d add? Let me know in the comments!

Don’t forget to save this post to your Pinterest Baby Names board so you can refer back to it as many times as you need when making the ultimate decision of what to name your baby boy!