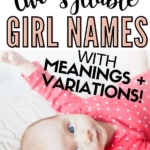 If you’re still deciding on a name for your baby girl, check out this list of beautiful 2-syllable girl names.

There’s just something about two syllable names that is perfect in so many ways – they’re not too long, not too short, and there is so much variety you can fit into two syllables. For example, the names Eva and Cadence each have two syllables, but they’re as different as can be.

Here you’ll find everything from classic names to more unique girl names on this list. You’ll see names that are growing in popularity, as well as names that will guarantee that your baby girl doesn’t have to share her name with any of her classmates!

Names can have different meanings in different languages and cultures. If you find a name you love, to some extra googling to make sure that it is a meaning you are satisfied with.

So definitely do some extra research once you find a name you like, to make sure you are happy with it. Google it to make sure that it doesn’t have any alternate meanings, celebrities you might not want to associate with, or other issues you wouldn’t think about just from looking at a list of baby names.

So without further ado…

It never ends! Once you’re done choosing a baby name, you’ll need to think about the next steps in your pregnancy. Here are some resources that will help: