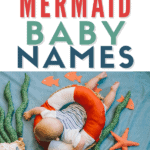 You’ll love these 99 adorable mermaid baby names for boys and girls. These ocean-inspired names are unique, special, and as magical as they are beautiful. Each of these mythical names is great for a first or middle name as well!

If you love the ocean and you know all the words to “Under the Sea” this baby names list is sure to have some winning options for you. Mermaids have always had a cult following and nature-inspired names are a huge trend right now. You’ll definitely want to ride that wave with these strong and enchanting names from the ocean.

Each of these siren baby names is referenced in history and mythology or your favorite tv shows and books. While the inspiration is unique, even the traditional mom is sure to find the perfect baby name from this list.

What are Good Ocean Names?

Here are just a few of the unique baby names from this list. Each of these names literally means ocean or sea.

Cute, right?! Kai and Mar would also be a great fit on our list of Short Girl Names that are just one syllable!

We’ve included the meaning for each name on this list, as well as the name’s origin. If you’re having a tough time deciding between two names, hopefully these meanings can help you break the tie!

Bonus D-name: you can add “Del Mar” as a middle name to any first name you like! “Del mar” means “from the sea” in Spanish and has a great ring to it! “Diana del mar” has a great sound to it, doesn’t it?

What Culture are Mermaids From?

Mermaid mythology spans many cultures and peoples. You can read about mermaid myths from around the world, here.

Not everyone agrees on what mermaids are or their character. Are they benevolent? Do they have a sneaky side? We say, you decide!

Either way, these beautiful creatures are certainly an amazing inspiration for alluring and charming baby names and we hope you found the perfect name for your bundle of joy!

When you’ve finally finished marveling over these incredible mermaid baby names, you can find even more baby name inspiration from these Uncommon Baby Boy Names for 2021 and these 10 Uncommon Baby Girl Names, you probably haven’t heard!