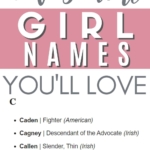 Are you considering a masculine or androgynous name for your baby girl? Then check out this list of awesome 100 masculine girl names, complete with meanings and origins.

Many of the names on this list are boy names that used to be girl names, and are now being given to girls more frequently. Many names below are slightly masculine girl names, while many are names that are traditionally male but sound great on a girl.

Reasons to give your girl a masculine name

There are many reasons to give girls a traditionally “masculine” name. Personally, I think it’s time to break some antiquated gender traditions, and one of the easiest ways to do that is to give babies beautiful names that might be a little different than what people traditionally expect. For example, there are tons of beautiful flower names for boys, and the masculine girl names below are actually quite beautiful.

Another reason is that sadly, having a gender-neutral or androgynous name can still be advantageous in life compared to women with more traditionally feminine names. For example, many women authors still write under a men’s name, or initialize their first name (example: J.K. Rowling), so that their novels are purchased by men and women and taken more seriously.

And of course, gender bias in the workplace still exists. Everything from not getting a callback for a resume because of a name to simply forming biases in people’s heads when they see a name on an email can still hinder a woman’s career, unfortunately.

Because of these reasons many parents want to give their girls androgynous, gender-neutral, or masculine baby names. But aside from that, the names listed below are simply beautiful and any girl would be lucky to names like these!

Besides, trends change and names go in and out of style often! Names that used to be men’s names are often typically used for girls, and vice versa.

What do you think of these names for baby girls? I would love to hear your thoughts below!