If you can’t imagine leaving home without your trusty DockATot, or are looking for a way to make a long haul flight with a baby more comfortable, then you are in the right place! Today I’m sharing tips and information on travel with a DockATot, including details and tips for taking it on a plane!

We just got back from a trip to Hawaii, and since we are based in Boston, it meant 12+ hour flights both ways. Cue a loud groan when I realized how tired my arms would be holding my chunky infant in my arms the entire time.

I knew our DockATot would be perfect for using on my lap during the flights as it would give her a place to rest (and hopefully sleep) while giving my arms a bit of a break. As a bonus, we could use it at our destination like we do at home!

Logistically, however, it can seem like a bit of an awkward item to bring with, but rest assured, taking the few minutes to figure out how to best travel with your DockATot will make your vacation so much easier!

Here are the answers to some of the common questions people have about flying with a DockATot so every family can feel prepared and ready to travel with an infant.

Let’s get down to business, shall we?

This post contains affiliate links. Thank you DockATot for sending product for this post. All opinions are my own.

What is a DockATot?

If you landed on this page looking for solutions to help babies sleep on a plane or the best baby gear for traveling with an infant and have never heard of a DockATot, you might be wondering what I’m talking about. 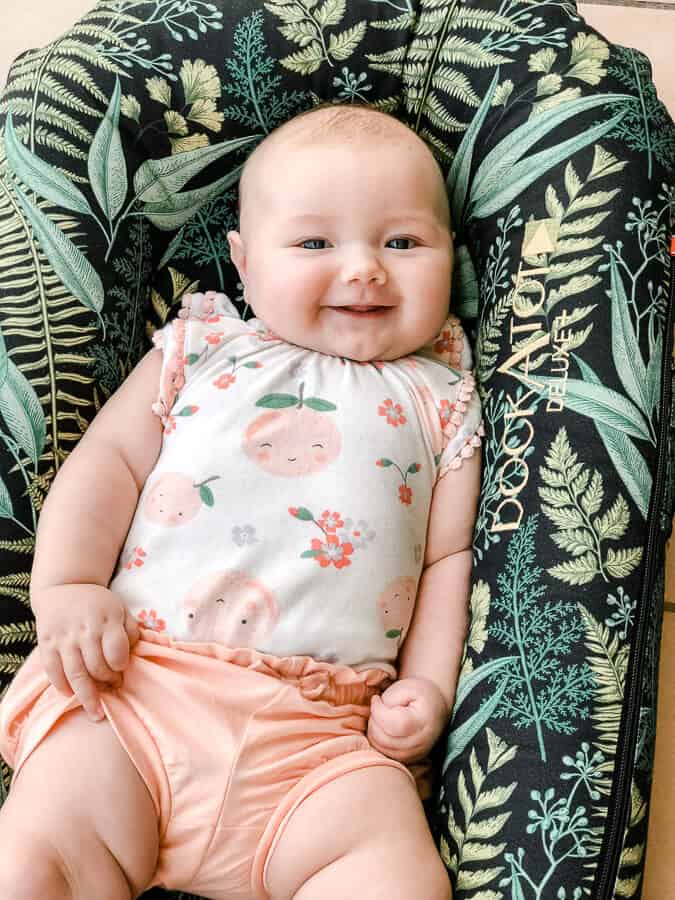 A DockATot is a multifunctional baby station that serves as a lounger, play dock and co-sleeper as well. It is lightweight and has dense rounded sides that creates a cozy environment for littles.

The DockATot comes in two sizes: Deluxe+ and the Grand. The Deluxe+ is meant for babies 0-8 months and the Grand works for older infants and toddlers 9-36 months (and can be used as a transitioning aide to a toddler or big kid bed).

It is a mom favorite and one of the tops items mamas in The Mom Friend community recommend as baby essentials and for registries.

Flying with a DockATot 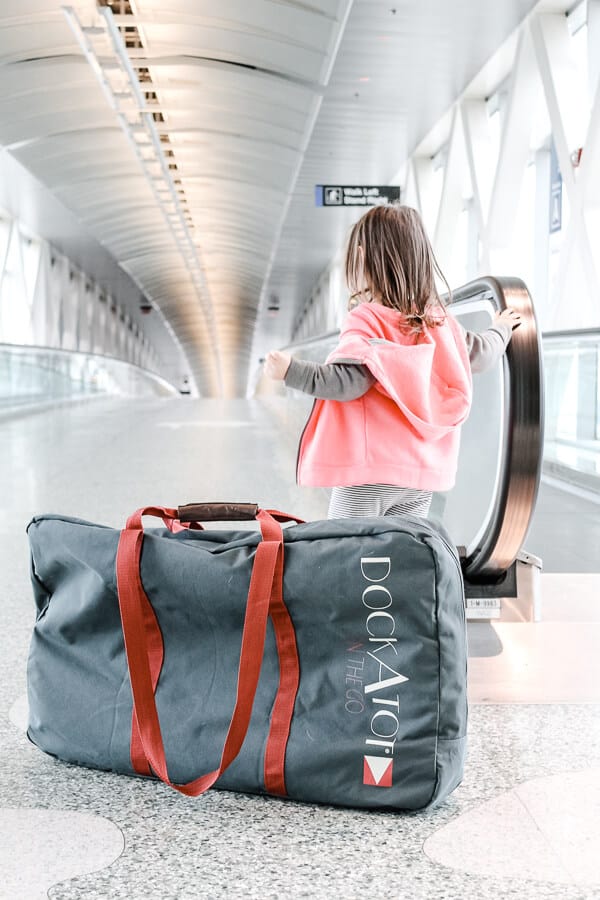 Once it becomes a staple in a household with a new baby, it is one of those things that you just want to take everywhere with you—to grandma’s house, on trips, or even to the beach for a comfy place to lounge.

It is easy to picture it at the destination, but what about getting it there? Here are some simple questions and answers.

Can you take a DockATot on the plane?

Answer: It depends. If you have a DockATot Deluxe+ (the smaller version meant for babies, then you will most likely be able to bring it onboard as a carryon. This will depend on individual airline carryon size guidelines and how strict the employees are about following the rules.

You will not be able to bring the DockATot Grand onboard as a carryon as it is too large—it will need to be checked with other luggage.

Does a DockATot fit in a suitcase?

Answer: Typically yes, but there is a better solution.

The Deluxe+ is 29 inches long with the buckles closed (34 with buckles open) and is made of soft pillow like materials. It could easily be stored in a suitcase that is large enough (though would not fit in a standard rolling carryon). However, it would then take up almost the entire suitcase requiring you to pull around an additional bulky bag.

The DockATot On the Go Transport Bag is a more practical solution. Because the Dock is so lightweight, it is easy to carry or stack on top of other luggage.

The Transport Bag keeps the Dock clean, is water resistant and generous in size. Similar to a duffle bag, it is not bulky and can fit into spaces (such as an overhead compartment) with ease. It is larger than the Dock itself at 30″x 18″ x 6″, making it the perfect place to stash things for travel or at the airport.

On our last trip, I threw in extra diapers and blankets for the plane into the bag and used it to store my Ergo Baby carrier when not being worn.

The Transport Bag comes in both sizes and multiple colors and can be purchased on their website or on Amazon.

Can the DockATot Transport Bag be used as a Carryon?

Again, it depends on airline regulations. However, because both the Dock itself and the bag (Deluxe+ version) are lightweight and flexible, it is easier to pass off as a carryon bag than other items that may be pressing the size limits.

We flew on American Airlines, which is one of the more strict domestic airlines when it comes to luggage allowance for traveling with a baby. They are notoriously picky when it comes to sticking to their rules of only allowing either a stroller or car seat for gate checking and requiring all strollers be under 20 lbs.

The Deluxe+ is larger than the carryon allowance even without the bag, but I found holding the bag on the opposite shoulder when handing my ticket for scanning at the desk let it fly under the radar. It was not questioned for 3 out of 4 flights.

The only time it was questioned was during our flight from LAX to BOS.  I sent my husband onto the plane with all of our bags while trying to deal with very loud and very public meltdown when Charlie refused to get on the plane. Oh, the joys of traveling with a toddler!

The airline employees first tried telling him he had too many bags, and then took notice of how big the transport bag was. They insisted it was too large, so I had to plead with them (while trying to pull a wailing toddler from the ground) that it was only a pillow for the baby and made a show of squeezing the bag so they could see it.

They made a big deal out that it wasn’t going to fit but allowed us to try it since we said it fit on every other flight (and did fit once onboard this one too).

So yes, technically it was bigger than their guidelines and they could have made us check it, but you will probably be able to take it on unnoticed.

Know your airline and be prepared for the worst case scenario just in case!

Traveling with a DockATot + Using it at Your Destination 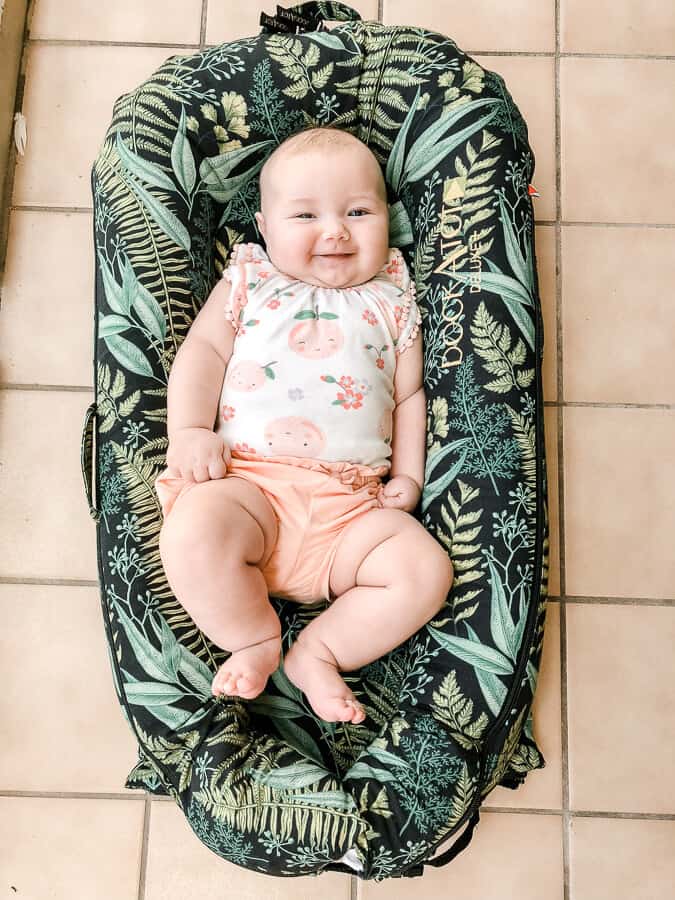 The best part about traveling with your DockATot is having it at your destination.

It instantly creates a safe and clean padded surface to put your baby down, no matter what your surroundings end up being or looking like. Use it in the airport during a layover, out on a balcony at a hotel, or at the park or beach.

I definitely recommend getting a second cover in a dark color or pattern—not only will it help prevent stains from showing (like if using on the floor) but it ensures there is never any downtime without a cover once back home when washing it.

Our second cover is Night Falls which is perfect for traveling, but you can find all their gorgeous covers here.

Traveling on a plane with a DockATot is super easy—especially with the Transport Bag—so definitely consider taking it on your next trip!

For more tips and ideas for traveling with a baby, be sure to check out my posts on traveling carryon only with a baby and how to figure out what baby gear to bring! 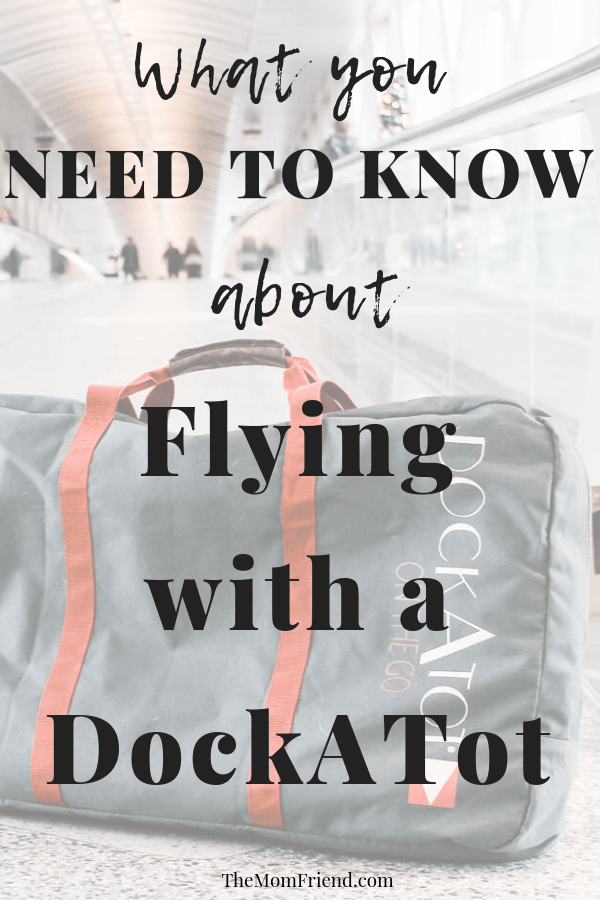