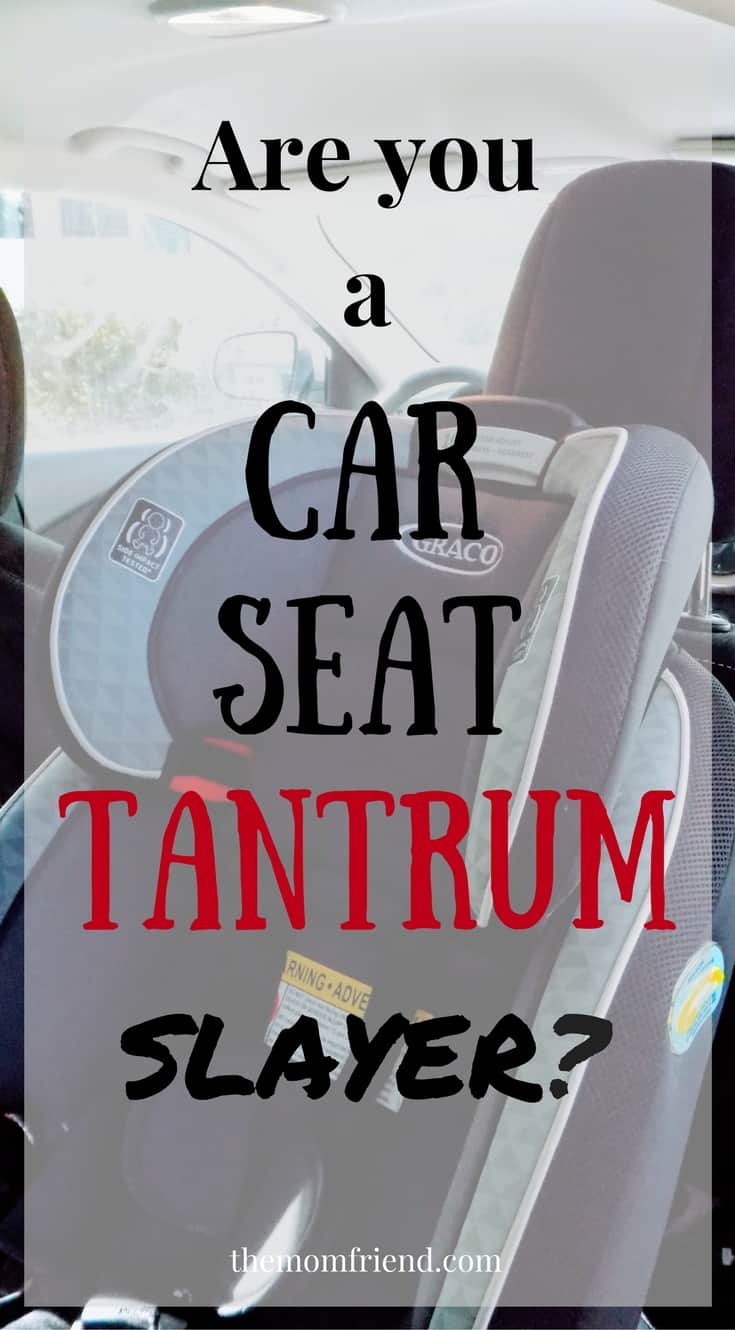 Photos by Mary Ware
When Red Baron told me that they were introducing a new female icon who personifies busy moms who find humor in hectic situations, I loved the idea. The Baroness is all about encouraging moms to share their “war stories” to help us find joy in even the toughest of situations by awarding parenting patches!

What I love about these patches is that they celebrate the mom behind the chaos, and her craftiness in finding solutions, rather than always having the right answers! The patch I’m choosing is the Tantrum Slayer, because after one too many car seat tantrums this week, I was finally able to keep my sanity and get one under control! 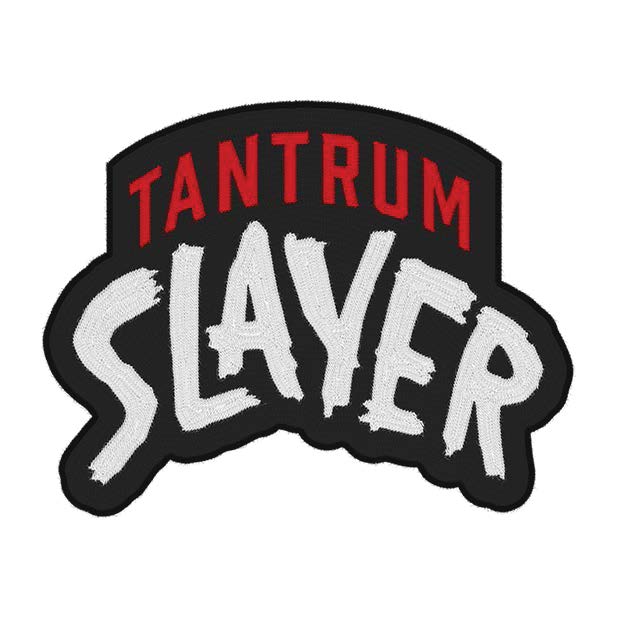 Charlie has developed a not-so-fun habit lately of throwing epic car seat tantrums. Not lucky enough to know what one looks like? Let me explain.

Imagine trying to get a Tazmanian Devil to hold still, and then buckling in a squiggly octopus. Add in the noise level of a howler monkey and you’ll have a pretty good idea about what a car seat tantrum looks like.

This week she had 3 of them, and each one started for a different reason.

By Friday I was exhausted even before picking her up, and I just knew I didn’t have it in me to wrangle her into her seat and drive 25 minutes home listening to her wail.

As soon as I arrived I realized it was another day of not wanting to leave the playground. She started putting up a stink right away. 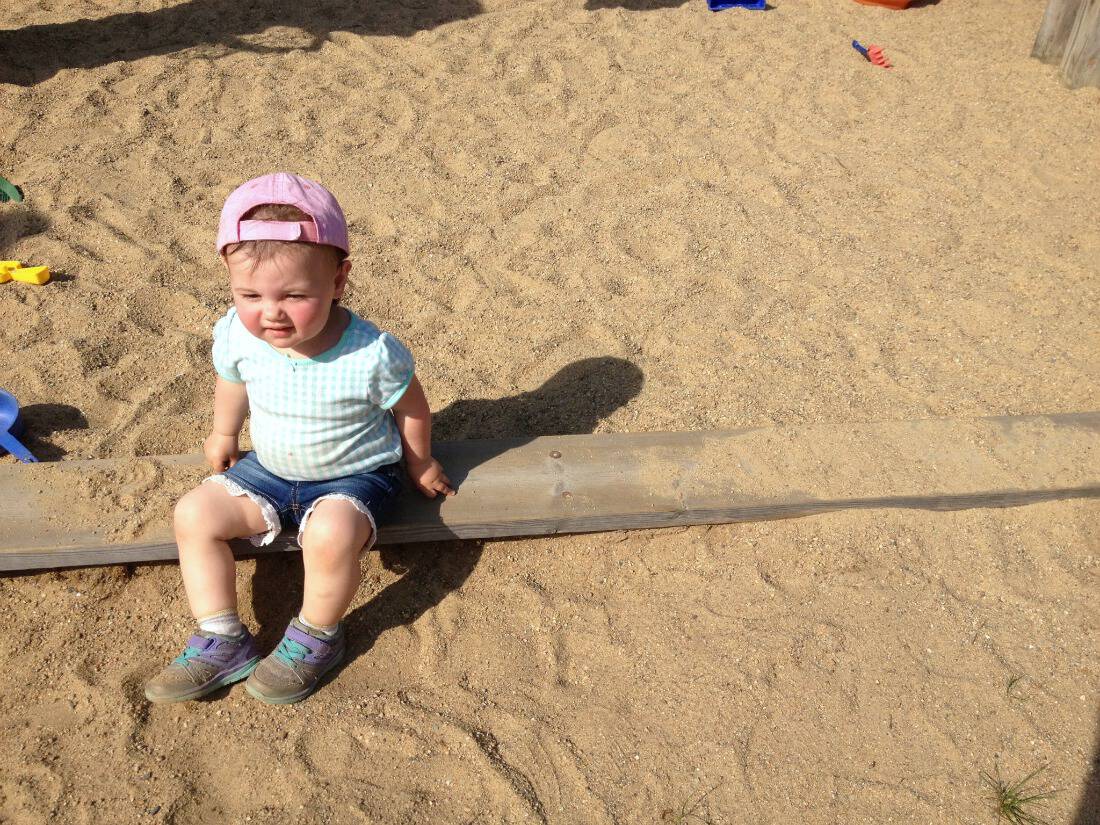 When we finally left, she instantly pointed to the school and asked to walk. It was decision time. Leave and suffer the consequences, or give in and follow her around and hope she tired herself out before the ride! I decided I only had the energy to follow, so I let her explore all around the school property. We ended up having fun, her touching different textures around the building and finding fun things, and me watching her explore. 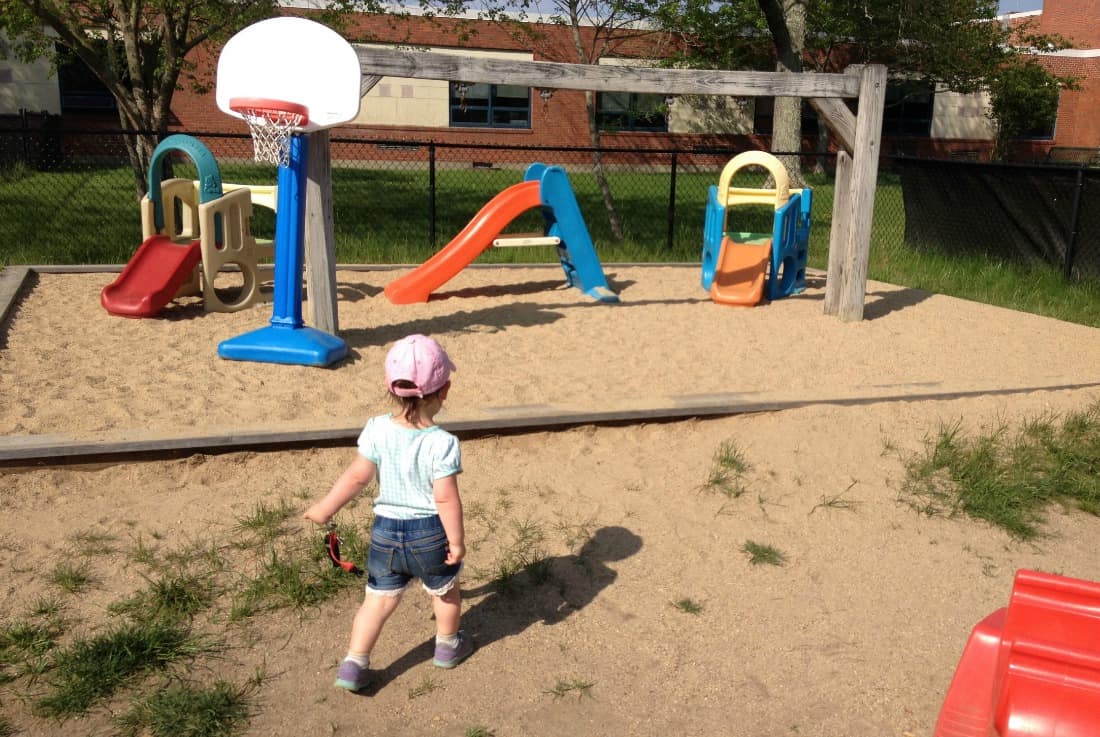 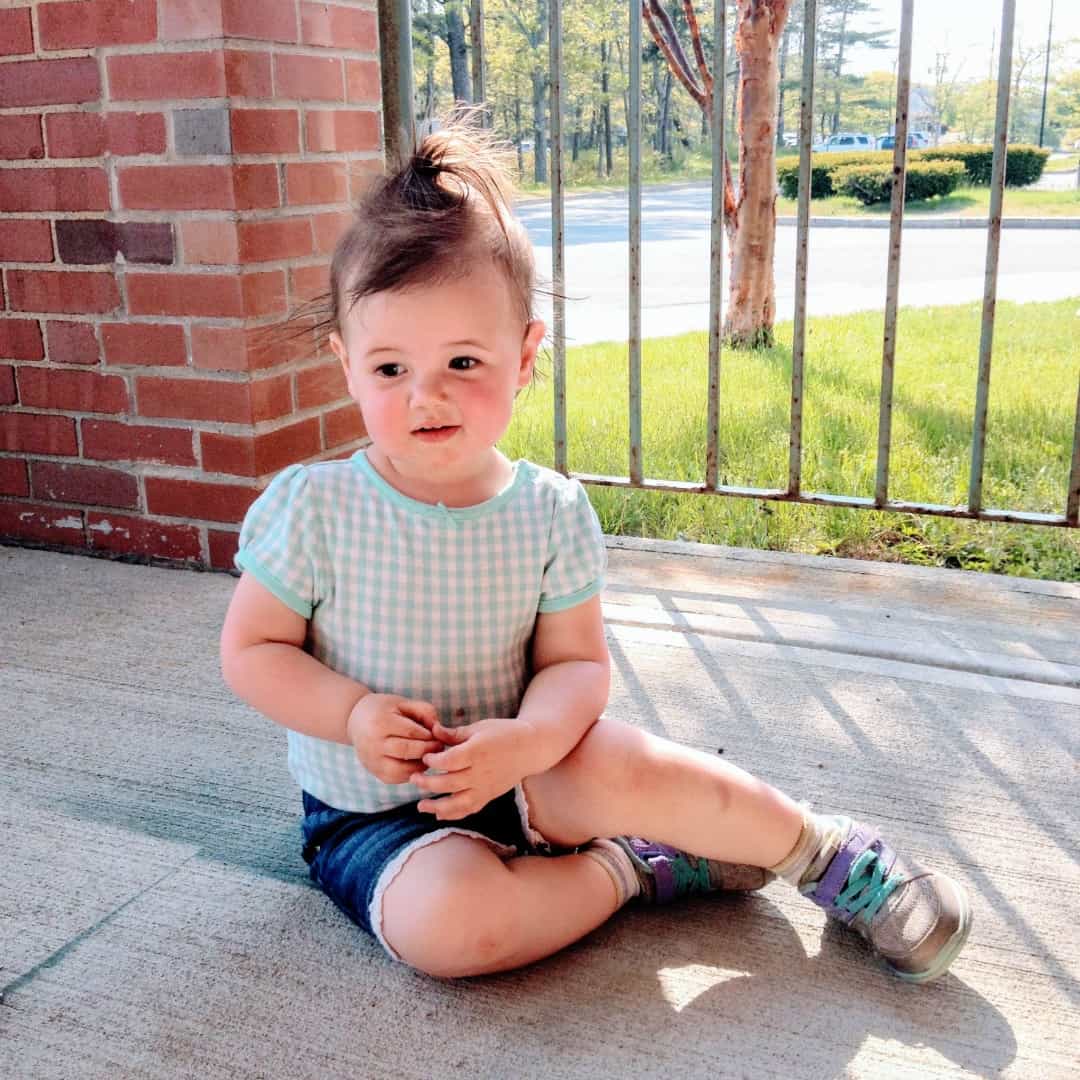 That’s my girl- dirty, sweaty, messy hair– she goes all in at play time! The random wandering around the school continued for about 15 minutes until I saw an opening.

I bribed her (yes, I am a briber!) with a snack (Hey, let’s go get in the car and have a cracker! Yum!) and when she started to resist at buckle time, I put on my best song and dance impressions and distracted her. I quickly shut the door, made sure extra toys and books were within my reach, and away we went!

It took all my energy to keep her happy on the way home, but at least she stayed content. And luckily she stayed that way through bath time and getting dinner on the table. Thank goodness it was pizza night—I did not have it in me to cook after spending all afternoon trying to prevent a meltdown! 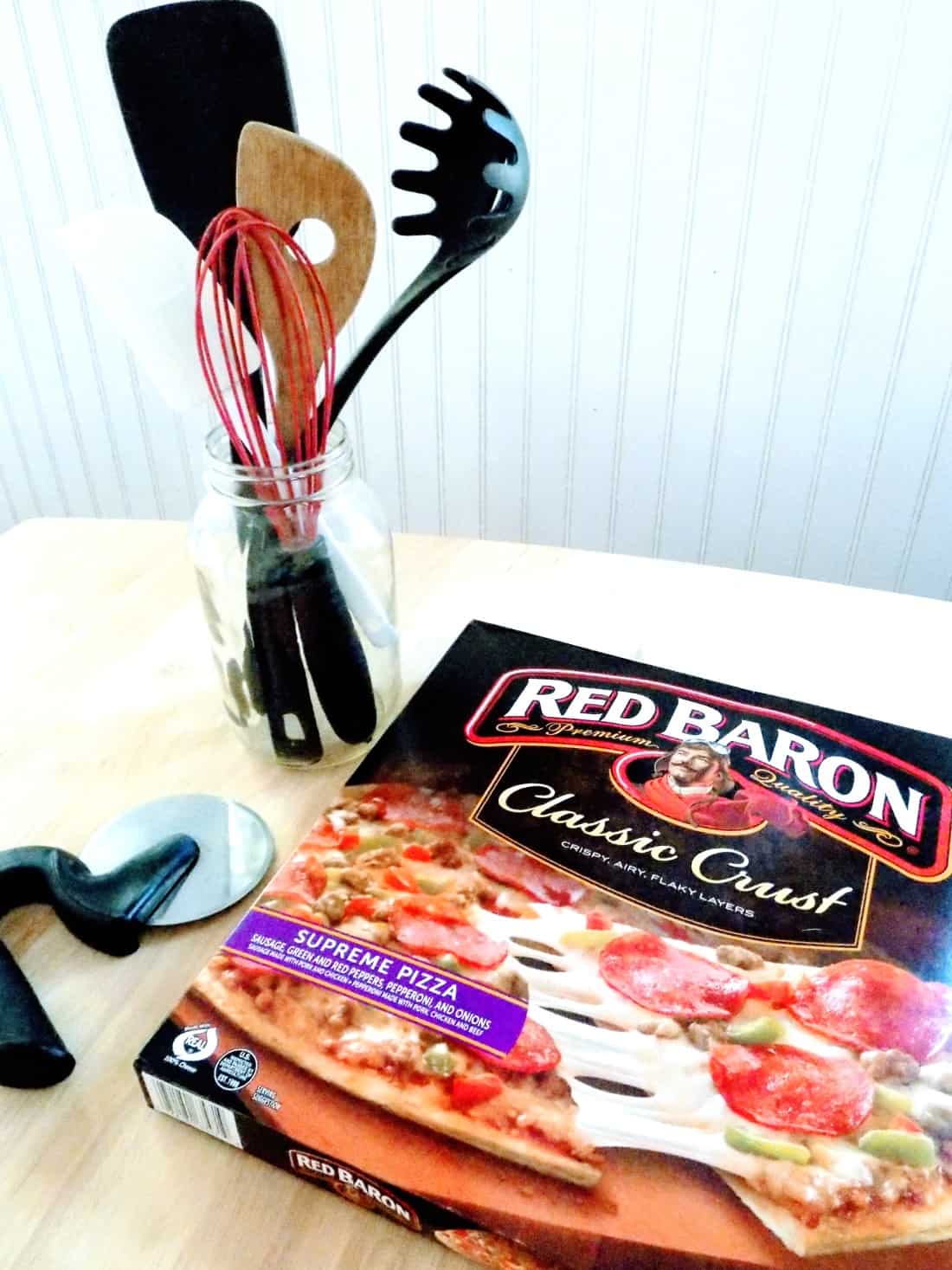 It’s nice to know that even after a hard day or an epic car seat tantrum, that we can relax and enjoy the evening with a great dinner together and snuggles after the fact! At her age she is in awe of the toppings on pizza and likes to peel them and eat them one by one. I have to say, I do too ;). 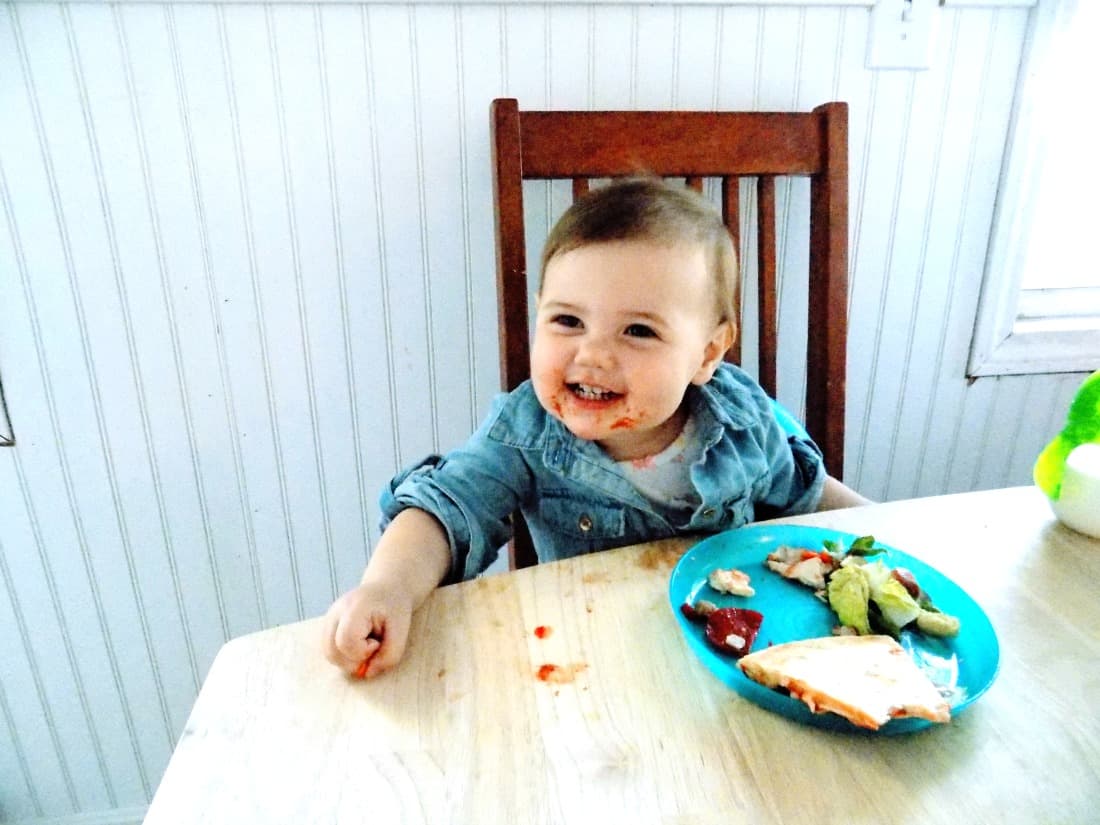 I have to admit, it’s fun to think about the normal and uneventful days and see them in a new light. Rather than being annoyed at waiting out a tantrum, I got to be a tantrum slayer and watch the delight in Charlie’s eyes as she explored.

Red Baron wants to celebrate your motherhood war stories too. After all, the new Baroness is the #wingmama of meal-time chaos. Share your war story with the @Baroness on Twitter or Facebook, and use the hashtag #Wingmama. I’ll be giving a free Red Baron pizza coupon to 3 lucky readers who do! Just leave me the link to your tweet or Facebook status in the comments, or send me a message on either one to be entered. (Here is where you can find me on Twitter and Facebook).

Tell me your best war story in the comments below—I can’t wait to hear it!

Of all of the tantrums, car seat tantrums are truly the worst! Love this post

You rocked it! I'm totally not above bribes either!

The car seat tantrum is the worst! Mine is always because she doesn't want to get in the seat or she wants to buckle herself. If I give her the keys it's helpful, but then I hope she doesn't throw a fit when I need them back!